The Altered Carbon Scene That Went Too Far

Netflix’s “Altered Carbon” is an ambitious noir thriller that impressed fans of other well-known sci-fi franchises like “Blade Runner,” “Ghost in the Shell,” and “Westworld.” The series follows Takeshi Kovacs (Joel Kinnaman/Anthony Mackie) as he investigates the seedier side of the universe. The inventive technology called Stacks (which store human consciousness in a disk) allows Kovacs to jump into different bodies called “sleeves.” In Season 2 he’s given a brand new sleeve — which happens to look like Anthony Mackie — and it comes with an array of genetic modifications, too.

Unfortunately, Netflix canceled the series back in 2019 shortly after Season 2 debuted on the streaming service. Many fans were hugely disappointed because the finale left things on a massive cliffhanger as Poe (Chris Conner) and Miss Dig, aka Annabel Lee, (Dina Shihabi) have a mystery Cortical Stack to decode when the show abruptly stops.

In addition to its thrilling twists and turns, “Altered Carbon” is incredibly action-packed — and at times, pretty bloody. But in Season 1, Kovacs is forced into a grisly moment that some fans think went too far. 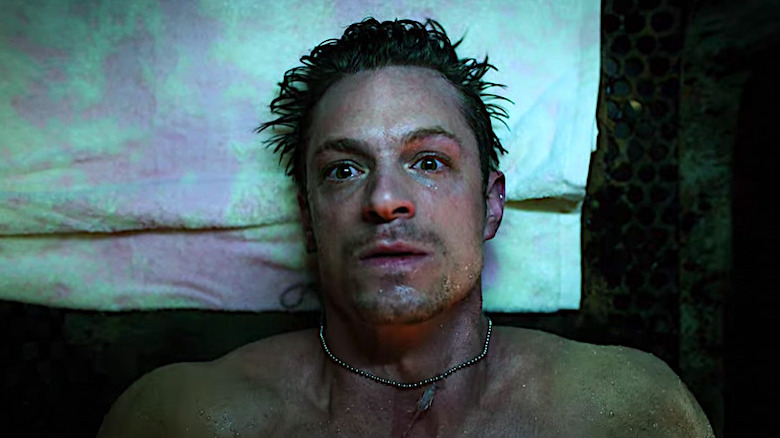 In Season 1, Episode 4 “Force of Evil,” Kovacs (Joel Kinnaman) is locked in a virtual reality prison and tortured by Dimi (Michael Eklund) because they think they have police officer Elias Ryker, the sleeve being used by Kovacs. It’s a brutal episode as the torture gets progressively worse, resetting Kovacs’ body after each round so Dimi can start fresh.

This is all intercut with flashbacks to Kovacs’ envoy training under Quellcrist Falconer (Renée Elise Goldsberry) who taught him how to mentally withstand VR torture. It’s a lot for the audience to endure, let alone Kovacs, but it could’ve been much, much worse. In Richard K. Morgan’s original book, the hero is virtually transformed into a young girl as a way of heightening the torture. In 2018, showrunner Laeta Kalogridis explained to iO9 why they changed the scene for the series, saying “The whole point of that [scene] in the book is, I believe the quote is: ‘Women are the race. Men are just f*****g fighting machines.”